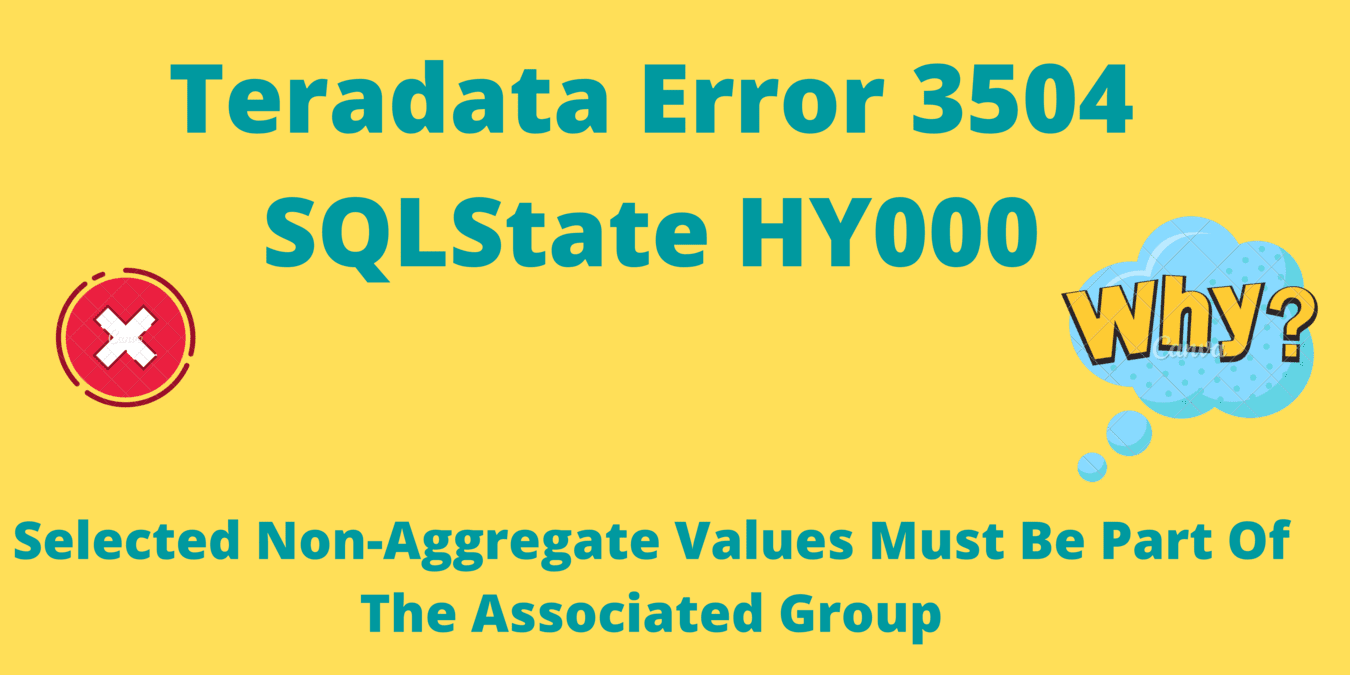 In this post, I will explain why you encountered an error Teradata Error 3504 SQLState HY000 Selected non-aggregate values must be part of the associated group while executing the SQL query in Teradata. I will present the cause of the problem and show how to avoid the error in the future.

Teradata is a powerful and scalable relational database management system (RDBMS) that is designed for large-scale data warehousing and business intelligence (BI) applications. It is developed and maintained by Teradata Corporation, and is used by businesses and organizations around the world to store, manage, and analyze large volumes of structured data.

Teradata is based on a shared-nothing architecture, which means that each node in a Teradata database system has its own processors, memory, and storage, and can operate independently of the other nodes. This allows Teradata to scale horizontally and support very large amounts of data and high levels of concurrency.

Teradata is optimized for data warehousing and BI applications, and provides a number of features and capabilities to support these types of workloads. For example, it supports columnar data storage, which can improve the performance of data warehouse queries that scan large numbers of columns. It also supports parallel query processing and data loading, which can improve the performance of ETL (extract, transform, and load) operations.

Overall, Teradata is a powerful and scalable database system that is well-suited for large-scale data warehousing and BI applications. It is widely used in industry and has a large and active user community.

Error 3504 occurs when grouping data in Teradata using the GROUP BY statement. Whether you only write the DML (SELECT) query or use it during a DDL operation (e.g. CREATE VIEW), you’ll get the same error. Here is the easiest way to receive an error message:

The purpose of the above query is to calculate the average salary for all employees. However, something is probably missing …

No GROUP BY statement

During using grouping functions (e.g. SUM, COUNT, AVG), you must remember to apply the GROUP BY clause between the WHERE command and HAVING / ORDER BY. The order of the SQL operation is as follows:

Exception – you do not have to use the GROUP BY clause during grouping data without using additional attributes, but it is used rarely.

The problem Selected non-aggregate values must be part of the associated group may also occur if you already have the GROUP BY clause in your query and it means that the list of arguments in the GROUP BY clause is incomplete, i.e. not all arguments that are used with grouping functions were included in GROUP BY line, e.g .:

In the above query, after the SELECT statement we have 2 attributes EMPLOYEE_ID and YEAR, but only the EMPLOYEE_ID attribute is used with GROUP BY clause – it will not work. (Teradata Error 3504 SQLState HY000)

Always use the GROUP BY clause for grouping functions

To fix this error, you need to either include the non-aggregate value in the GROUP BY clause or use an aggregate function, such as SUM or COUNT, to operate on the value.

Here is an example of a query that would generate this error:

To fix the error, you could either include col2 and col3 in the GROUP BY clause, or use an aggregate function to operate on these values:

Certainly they are helpful during tests or searching for general sums or numbers of e.g. clients from the beginning of the company’s existence. Usually, we need more complicated calculations. So always remember to include the GROUP BY clause.

Always make sure that the list of arguments after the SELECT clause match the list of attributes in the GROUP BY command, e.g .:

To fix this error, you will need to include a GROUP BY clause in the query that defines how the non-aggregate values should be grouped.

How To Install Teradata Express On VMware Workstation Player On Windows Operating System – Great Start With Teradata In 5 Mins!

Teradata: what Is The Difference Between CASESPECIFIC And NOT CASESPECIFIC Data Type Attributes? – You Won’t Believe How Easy It Is – 5 Mins!

SQL Developer: How To Connect To Teradata Or MS SQL Server Database In Oracle SQL Developer? – 1 Great Tool For 2 Databases!