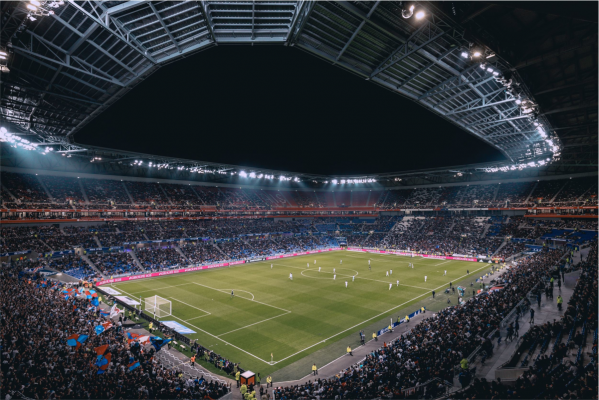 Photo by Thomas Serer on Unsplash

I have gathered to write this entry for a long time. One day, when I was playing with the capabilities of the Apache Spark MLib library, I came up with an idea …

What if it was possible to predict which team would win a football match? And it started …

I have already seen through the eyes of my mind those millions of coins that could be made on bookmakers 🙂 Well, to the point.

When I started thinking about it more deeply, I came to the conclusion that I would not only like to be able to predict the result of the match before it started, but it was more important to me to know how each team’s chances change during it.

In addition, I would like to have it presented in some graphical way, e.g. a graph. Then another idea appeared to create a web application, which will present the match schedule from several leagues, with an indication of “today’s matches” and currently ongoing.

The latter would present changes in individual teams’ chances in real time. Thanks to this, I could follow how each team’s trend changes. And in this way I found a job for a few months (about 3). 🙂

Immediately, when I started to create architecture, I wanted to create it so that individual elements were not rigidly connected with each other, more approach to this problem modularly. And this is how applications began to appear that were only responsible for:

I immediately point out that I am not a web developer, so the part related to the web application was treated with a grain of salt, it was supposed to work and that’s it.

With the increased number of applications, there was a need to somehow be able to conveniently manage the launch of individual applications (schedule) and have insight into their logs. In this case, Apache Airflow came to the rescue, which worked very well.

The result of a football match may be the win of either team or a draw. Something obvious! So we have 3 possible surprises. The classification algorithm that I implanted focused on calculating the probability of these events occurring at a given moment of the match. It was based on over 100 features that he took into account to calculate the probability of any of the events.

When I submitted the whole application divided into microservices and launched it was time for testing. I watched selected matches live, watched the situation on the pitch and at the same time looked at my artificial intelligence model. The fun was huge as when I looked at the chart and it largely reflected the actual state of play on the pitch.

Below are some selected matches along with an analysis of how and what factors influenced the course of the meeting.

Bayern Munich was the clear favorite. But Ajax showed on the pitch the will to fight and skills, which translated into the result of the match, where a 3: 3 draw was for Ajax a reflection of their good play.

In general, Borussia Dortmund played a weak match, but the one who creates more chances and is statistically better, but the one who uses these chances does not always win. But from the graph you can easily see the better and worse moments of the game of both teams.

After Reus’ goal, Borussia Dortmund rested on her laurels. Their game has become static. Instead, the team of guests was growing the desire to win a balanced fight. Interestingly, the algorithm “stated” that Borussia M’gladbach has an equal chance to win the match as well as the hosts. Only time and happiness were lacking.

Eintracht Frankfurt was the favorite of the match from the first minutes, but Lazio scored the first goal in the 56 ‘match. But Eintracht players equalized at 65 ‘and then took the lead at 71’.

Unfortunately, the maintenance of the servers and the fees associated with the subscription with the match data provider exceeded my budget, which I anticipated. To break through the competition today, all you need is time and money to maintain.

The second point is that if I were to take up this topic for the second time today, I would approach it in a different way. In some cases I would use other technologies 🙂

If you run a website with similar topics and would like to extend your website with a similar service, write to me. Maybe we can create something interesting together! 🙂

[SOLVED] Teradata: Error 3653 [SQLState 21S02] All select-lists do not contain the same number of expressions.

Hi, good to see you on our blog! :) We hope you will find here a solutions for you questions and learn new skills. Ewelina is Data Engineer with a passion for nature and landscape photography. Paweł works as Big Data Engineer and most of free time spend on playing the guitar and crossfit classes.

wpDiscuz
0
0
Would love your thoughts, please comment.x
()
x
| Reply
We use cookies to ensure that we give you the best experience on our website. If you continue to use this site we will assume that you are happy with it.Ok