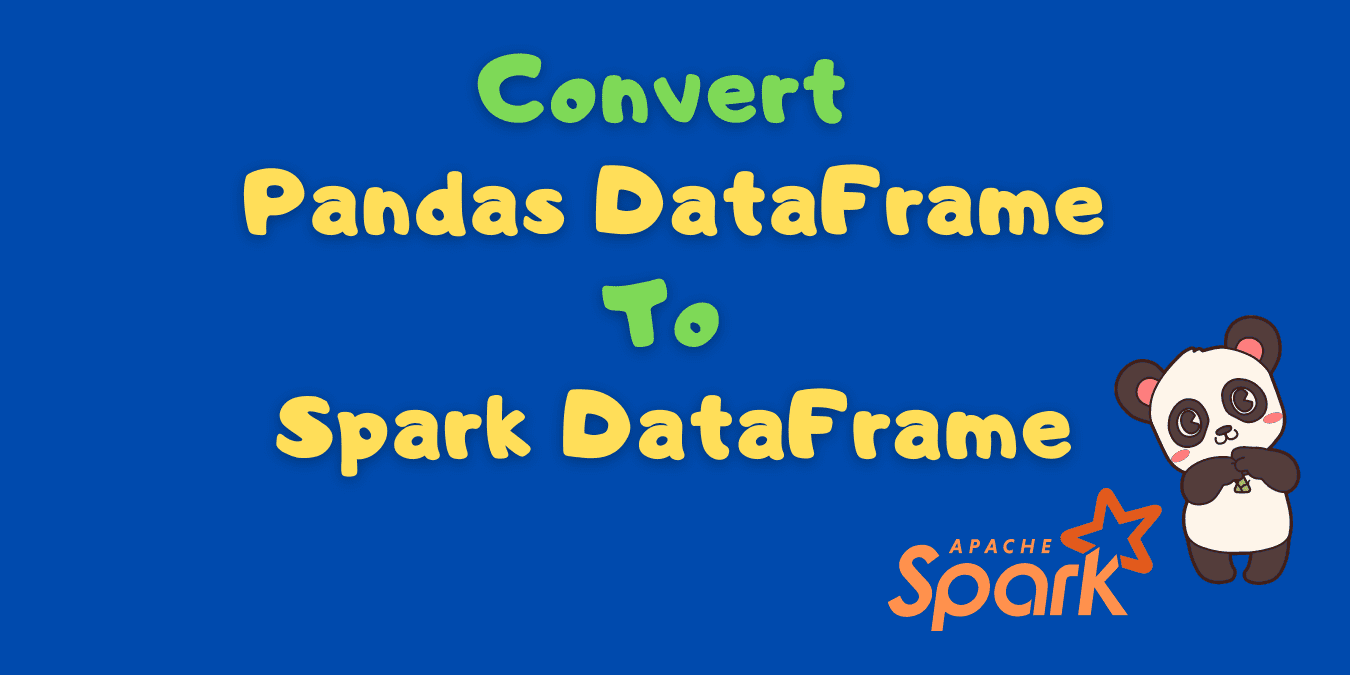 In this post I will show you how to convert Pandas DataFrame To Spark DataFrame.

Python is a high-level, general-purpose programming language that debuted in 1991. It is extensively used for a broad range of tasks like web development, scientific computing, data analysis, artificial intelligence, and others.

Python’s appeal stems in part from its simplicity and ease of usage. Python code is simple to read and understand, making it an excellent choice for both new and experienced programmers. Python also has a big and active community that contributes numerous libraries, modules, and frameworks to the language’s utility and versatility.

Pandas is a strong and adaptable open-source data manipulation and analysis package for Python. It offers data structures and data manipulation capabilities for processing and analysing structured data, such as spreadsheets and SQL tables, in a manner similar to R’s DataFrame objects or Python’s data frame idea.

Pandas has a wide range of data manipulation techniques, such as data indexing and slicing, data reshaping, data combining, and data aggregation. It also has a robust collection of functions for dealing with missing data, working with time series data, and reading and exporting data to CSV, Excel, JSON, and SQL file formats.

A DataFrame is a two-dimensional, size-mutable, heterogeneous tabular data format with named axes in pandas (rows and columns). It may be compared to a spreadsheet or SQL table, as well as a dict-like container for Series objects.

A DataFrame can be created from a variety of data sources, such as:

A DataFrame can be manipulated using various methods such as:

DataFrames in Pandas are a key tool for data analysis and manipulation in Python, providing a powerful and versatile approach to interact with structured data.

In Apache Spark, a DataFrame is a distributed collection of data structured into named columns. It is conceptually similar to a table in a relational database or a data frame in R/Python, but with distributed processing improvements and the potential to scale to massive data.

Spark DataFrames are built on the Spark RDD (Resilient Distributed Dataset) API, which serves as an abstraction for distributed data processing. The DataFrame API is comparable to the pandas DataFrame API in that it provides for the quick and fast processing of huge amounts of structured data.

A Spark DataFrame can be created from a variety of data sources, such as:

A Spark DataFrame can be manipulated using various methods, such as:

Spark DataFrames are intended for large-scale, distributed data processing, and they harness the power of Spark’s cluster computing capabilities to conduct data operations significantly quicker than standard data processing frameworks such as pandas.

Pandas DataFrames and Spark DataFrames are both data structures for managing and processing tabular data, however they differ significantly:

To convert a pandas DataFrame to a Spark DataFrame, you can use the createDataFrame method provided by the pyspark.sql module. Here is an example of how to do this:

Once you have the Spark DataFrame, you can use the DataFrame API to execute operations on it such as filtering, aggregating, and joining.

To convert a pandas DataFrame to a Spark DataFrame with a specific schema, you can use the createDataFrame method provided by the pyspark.sql module and pass in the pandas DataFrame as well as the desired schema. Here is an example of how to do this:

Once you have the Spark DataFrame with the given schema, you can use the DataFrame API methods to execute operations on it such as filtering, aggregating, and joining.

Pandas DataFrame Converted To a JSON

Using spark.read.json() with a pandas DataFrame converted to a JSON string:

[SOLVED] How To Check Cloudera Impala Version CLI? – This 1 Simple Method Will Help You!